Standard Diversified (SDI / SDOIB): Get a Solid Tobacco Brand and a Solid Marijuana Brand at a 33% Discount to Their Market Value

HomeOur BlogStandard Diversified (SDI / SDOIB): Get a Solid Tobacco Brand and a Solid Marijuana Brand at a 33% Discount to Their Market Value
Geoff Gannon September 18, 2018

Standard Diversified (SDI / SDOIB): Get a Solid Tobacco Brand and a Solid Marijuana Brand at a 33% Discount to Their Market Value

Geoff’s Note: Standard Diversified also has extremely illiquid super voting shares that trade under the ticker SDOIB. SDOIB shares are sometimes available at a discount to SDI shares (for example: last week, 400 SDOIB shares changed hands at something like 30% less than the then current price of SDI). SDOIB shares have 10 times the votes of SDI shares and can be converted into SDI shares. Buying Turning Point Brands (TPB) directly is usually the most expensive way to get exposure to Turning Point Brands stock, buying SDI is often the next most expensive, and buying SDOIB is sometimes the cheapest. This is not always the case. So, make sure you always check the bid/ask prices of each of these 3 stocks against each other before deciding which of the 3 stocks to buy to get direct or “look-through” exposure to Turning Point Brands. SDI discloses it owns 51% of TPB. So, you can multiply the number of TPB shares outstanding by 0.51 and then divide that number by the combined number of SDI and SDOIB shares outstanding. This will give you the “look-through” value of SDI shares. Right now, I believe each share of SDI (or SDOIB) represents a “look-through” interest in about 0.59 shares of TPB.

Standard Diversified Opportunities (SDI) is a HoldCo that is majority owned by Standard General. SDI has three operating subsidiaries: Turning Point Brands (TPB), Standard Outdoor and Standard Pillar. At this point the majority of SDI’s value is made up of TPB. With TPB stock currently at $40 SDI’s stake in TPB is worth about $23.67 per share. Standard Outdoor is worth about $1.07 per share at cost and Pillar General about $0.78 per share. Net debt is -$0.94 cents. In total, SDI’s per share NAV is $24.58, or about a 49% premium to SDI’s stock price of $16.50. The company’s slide deck also has good details on the SOTP. Having established that the stock is cheap to its NAV, let me try to explain why I like the underlying businesses.

SDI is controlled and majority-owned by Standard General. Standard General is a special-situations investor that tends to take highly concentrated positions in off-the-run situations. Standard General owns over 86% of SDI. Adding insider stakes this becomes well over 90% of SDI’s total ownership. Before taking over SDI, Standard General owned a majority stake of 9.84MM shares in TPB, which it has placed inside SDI. Basically SDI is now Standard General’s public vehicle through which it holds TPB shares and other long-term investments for an indefinite time horizon. The following company slide does a good job of illustrating the SOTP:

TPB is in the other tobacco products business. Their products fall into three categories: Smokeless, Smoking, and New Products. TPB’s main asset is ZigZag, which is the #1 premium cigarette paper brand with 33% market share. ZigZag has been the paper brand of choice for cigarette and pot smokers for decades now. The main thing to keep in mind about ZigZag is that they have been able to increase prices above inflation for decades and grow volumes on top of this. With the legalization of Marijuana in Canada TPB is starting to see accelerating volume growth in that market. I would expect to see a similar trend with legalization in the US.

On the smokeless side TPB sells several brand of chewing tobacco/MST such as Stockers and Beech-Nut. This is basically a business where you can get 1-3% price increases per annum in a shrinking market. As MST is not exactly a hot market right now, TPB is able to acquire smaller brands at cheap multiples and grow them through their sales platform. TPB has done a good job actually growing volumes and gaining market share by rolling up other MST brands like this and aggressively going after shelf-space. Most recently, TPB reached a deal to prominently display Stokers and some of their other MST brands in Dollar General stores nationwide. Agreements with other large retailers are unlikely to be far.

Finally, in the New Products segment TPB owns e-commerce retailers of e-cigarettes and other tobacco products. While Smoking and Smokeless are mid-single digit growth businesses New Products is a high growth business. TPB has been rolling up physical and online distribution assets across the vapor category including Vapor Beast, Vapor Shark, Vapor Supply and International Vapor Group. TPB has been buying these assets between 4-6x EBITDA whereas TPB’s stock trades at about 15x NTM EBITDA. While there is an element of multiple arbitrate in the New Product and MST acquisitions, I think the fact that there is very little competition for these assets especially helps their case. There are no other publicly traded players of their size in the Other Tobacco Products (OTP) space and Altria (MO) is unlikely to compete directly with TPB with its $120bn market cap.

The underlying theme is that TPB seeks to own and acquire brands in a complex regulatory environments that can benefit both from their scale and larger salesforce. The OTP space is regulated like tobacco, but is more of a modern segment that moves faster and requires a high degree of responsiveness to manage regulatory parameters.

SDI acquired Maidstone Insurance Company through Pillar General for $2.5MM and a further capital injection of $10MM. In return, it is getting control of $50MM in insurance float and licences to write personal auto and property insurance in several states. Under previous ownership, Maidstone wrote only nonstandard auto as they had sold off  their property business to UIHC in 2015 and entered into a non-compete agreement. With SDI as the new buyer, the non-compete is no longer valid and Maidstone is able to write property business in every state they are licensed to do so again.

SDI has just moved into Maidstone’s former headquarters in Minneola, New York and management is heavily focused on turning around the insurance operations. During the last quarter first signs of success appeared as Maidstone posted its first positive quarter in years posting a combined ratio of 95% and an annualized ROE of 32%. I don’t expect the high ROE to be sustainable, but do view it as a sign that the turnaround is working and that TPB’s investment in Maidstone should be valued at its cost of $12.5MM.

SDI has to date purchased 179 outdoor billboard for around $20MM through a mix of cash, equity and seller financing.  The CEO of SDI, Ian Estus, has a background in the outdoor billboard business and has so far been able to buy billboards at attractive multiples. The main plan in this area is to buy under-earning under-occupied billboards and improve earnings by finding advertisers. SDI is currently financing about 50% of the billboard business with debt between 5% and L+7.5%. I would think they would eventually seek to fold billboards into the insurance business and finance them with far cheaper insurance float. I believe Standard Pillar is roughly cashflow breakeven at this point and there is clearly room for operational improvements. Boston Omaha (BOMN), a very similar holdco has a very similar (and currently slightly larger) outdoor billboards business for which they claim the economics are as follows: 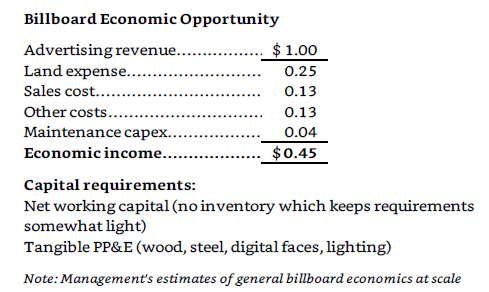 I have not seen any detailed disclosure of TPB’s outdoor billboard business yet but see no reason to value it at less than historic cost.

Between Smoking, Smokeless and New Products at TPB and Maidstone and Standard Pillar SDI is clearly an unusual combination of uncommon businesses. I hope the write-up provided enough context to show the reader why these are actually good businesses that are likely to do more than just earn their cost of capital and how the 33% discount to NAV provides an additional incentive to own SDI here.

Unlike the CEO of BOMN, Ian Estus is no nephew of Warren Buffet’s, which, I believe is the main reason for valuation differences between the two stocks. Still, I see no reason why SDI should not be worth its NAV.

Disclosure: I am long SDI