Gaia operates a streaming service like Netflix, but for yoga, meditation, and weird conspiracy videos. They have many great titles, like “The Baltic Sea Anomaly; A Crashed UFO Or Natural Rock Formation?” or “Cannabis Spirituality: Using Plant Medicine as a Sacred Tool”. The company is run by its founder, Jirka Rysavy, who owns over 32% of the company’s stock. Rysavy is an experienced entrepreneur who founded Corporate Express, which became a Fortune 500 company before merging into Staples. Gaia is growing extremely fast, but has...

This content is for Regular Membership and Annual Membership members only. Please login or register to view our content.
Log In Register
… Read more
Geoff Gannon March 30, 2019

Revisiting Keweenaw Land Association (KEWL): The Annual Report and the Once Every 3-Year Appraisal of its Timberland Are Out

This content is for Regular Membership and Annual Membership members only. Please login or register to view our content.
Log In Register
… Read more
Geoff Gannon March 26, 2019

The 3 most important variables to the Ball (BLL) investment thesis are:

Ball is one of the world’s leading suppliers of metal packaging to the beverage and food industry. The company has a long history and was founded in 1880. Through its entire history, Ball has been involved in close to fifty different segments. Today, the business is mainly based on delivering aluminum beverage containers to the beverage industry. The company’s business is about delivering aluminum cans to large consumer staple companies like: Coca Cola, Unilever and AB InBev.

This sounds like a really dull, capital intensive and boring business. So, why should it interest you?

The source of Ball´s competitive advantage is dependent on local scale and switching costs, resting on a highly consolidated industry among both producers and customers. The plants making the beverage container cans are huge. This is best illustrated by the size range of the production plants from about 100,000 square feet to around 700,000 square feet. The company’s largest site is the Findlay, Ohio plant (733,000 square feet) that produces both beverage cans containers and food containers.

To get an understanding of the underlying unit economics driving both revenue and profitability at Ball, it might be interesting to do some guesstimates on the profitability of the site locations.

In the North American segment, the beverage container industry represents about 110 billion units, where five companies dominate the market in the U.S, Canada and Mexico. For fiscal year of 2017, Ball produced 46 billion units, hitting a market share of 42%. This volume is served by 19 plants in the US, 1 in Canada and 2 in Mexico. They have also one joint venture production facility, but I have not included that one in this calculation. In total 22 plants, which means an average of 2.1 billion units per plant per year.

This means that – each year – the typical Ball plant should make:

Ball typically generates 9 cents in revenues per beverage can and 1.2 cents in operating profit per can. This is what generates sales and earnings at Ball. In other words, these are huge operations. Just like with distributors, it will be difficult to compete with a fully functioning and operative production plant. Given this, it is highly unlikely that a competitor would add excess capacity near an existing plant. It leads naturally to local markets as it does not make sense to transport the products …

IEH Corporation (IEHC): May Be a Good, Cheap Stock – But, Definitely in the “Too Hard” Pile for Now

As this is an initial interest post, it’ll follow my usual approach of talking you through what I saw in this stock that caught my eye and earned it a spot near the top of my research watch list – and then what problems I saw that earned it a low initial interest score.

I’ll spoil it for you here. IEH Corporation (IEHC) is a stock I’m unlikely to follow up on because of the difficulty of digging up the kind of info that would make me confident enough about a couple key problem areas I’ll be discussing below.

I think I have a pretty biased view of this stock. Or, at least, some of what I’ll be discussing in this article might give you a negative, biased impression of the stock. And there are actually a lot of good things here. So, I’d like to start by linking to some bloggers who have discussed this stock in-depth in a way that’s different from some of what I’ll be focusing on here.

I recommend you read theses posts:

“IEH Corporation: A Tiny Company with the Potential for a Big Dividend” – Weighing Machine (2013)

In case you chose not to click those links, I’ll give you a quick explanation for why I might be interested in this stock at first glance.

The stock is overlooked. I manage accounts that focus on “overlooked” stocks.

This stock has a $40 million market cap – of which, probably close to 50% doesn’t actually trade (it’s owned by insiders, etc.). So, we’re talking about a “float” of about $20 million or $25 million. Something quite small.

The company also does something quite boring. It makes connectors which go into products assembled by defense contractors serving the military, space, and aerospace industries. Investors would know the end products this company’s output goes into – Boeing 737, Airbus A380, F-35, Apache AH-64, Hubble Telescope, etc. And investors would know the customers who buy connectors from IEH – Raytheon, Northrup, Honeywell, Lockheed, NASA, etc. But, neither the company itself nor the products it produces would be high visibility to investors. I find this tends to make it more likely a stock is overlooked. For instance, in the movie industry – investors would focus immediately on the theater owner, the studio producing the film they’re watching, etc. and less on the companies that make the theater’s sound systems, digital projectors, etc. or provide the ticketing kiosks or run the theater’s loyalty program.

In this way, IEH Corporation could be something like George Risk (RSKIA) – a company that has a market cap of under $50 million, is about half owned by insiders (so, the …

*I own shares in this company, and it is a very illiquid stock Inspira Financial trades under the ticker LND.V on the TSX Venture exchange in Canada, and trades OTC under the ticker LNDZF in the US. While the stock has more volume in Canada, LNDZF is very illiquid. For most of my purchases of LNDZF, my trades accounted for the entire trading volume that day of the stock. Inspira Financial is selling for about $4.8 million USD, or $6.4 million CAD. The company reports...

This content is for Regular Membership and Annual Membership members only. Please login or register to view our content.
Log In Register
… Read more
Geoff Gannon March 14, 2019

PRAP Japan (TSE: 2449) is a public relations (PR) consulting firm offering marketing communications, corporate branding, crisis communications, event management, and content production services to corporate customers in a variety of industries. Founded in 1970, the company is among the older and established PR firms in Japan. Over the past decade, PRAP has increased its efforts in China, mainly targeting Japanese companies wanting to establish a presence in China. 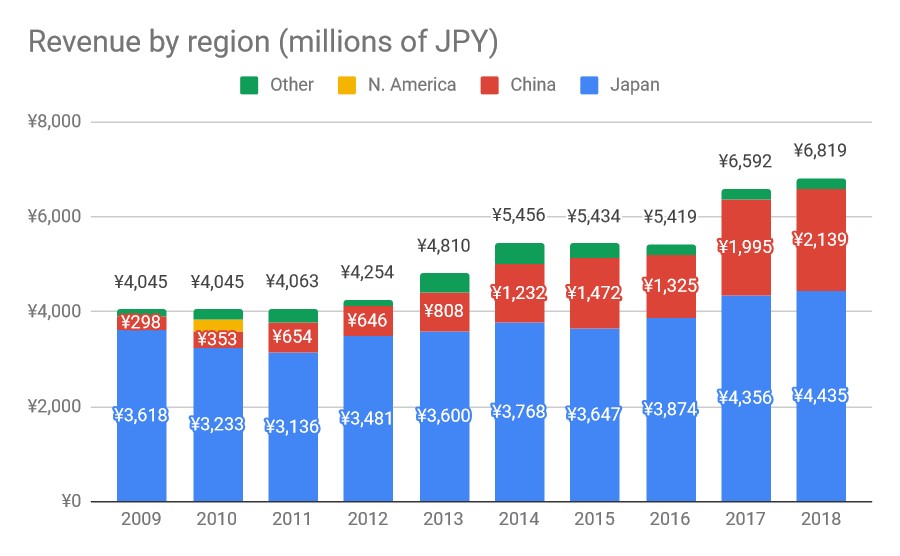 Though PRAP offers a variety of services, it is a single segment company. As of 2018, PRAP is the 4th largest PR firm in the country by revenues.

The Public Relations Society of Japan (PRSJ) estimates that the PR industry size in Japan was 101.6 billion yen ($90 million USD) in 2016 (Japanese). Long term historical data isn’t available for the industry as it is still small. That said, PRSJ notes that the industry is rapidly growing: 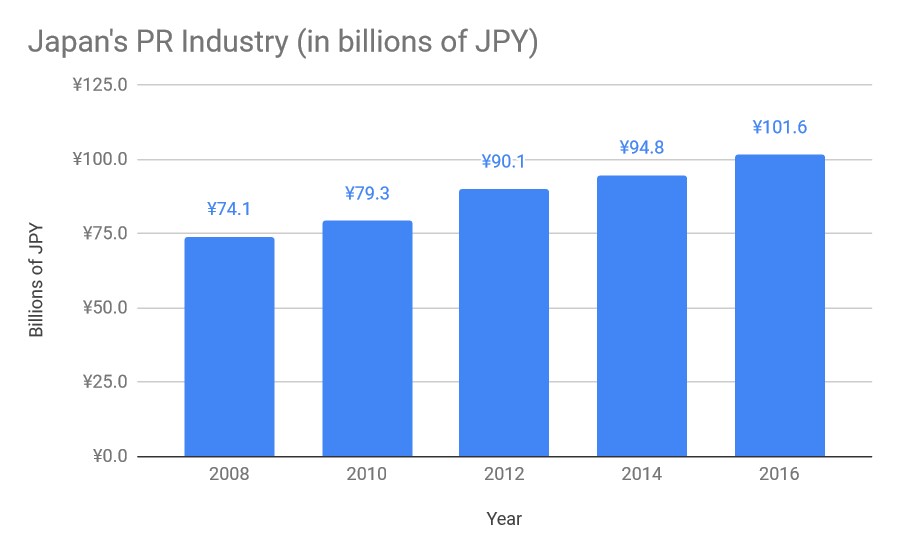 Over the last 8 years, the Japanese PR industry has grown at a 4% CAGR. In the last couple years, newswire services and video production and promotion services have fared particularly strong. The key players in the PR industry are: 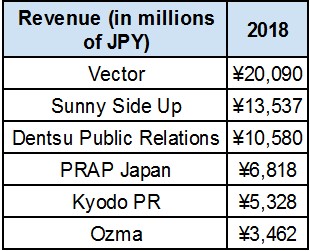 Founded by John Gokongwei Jr., Universal Robina Corp. (URC) has come a long way since its humble inception as a corn starch manufacturer in 1954. Through decades of diversification, URC is now a leading producer of branded snacks and beverages in the Philippines. To a certain extent, URC is like a mixture of Pepsi Co. and Mondelez in Southeast Asia. While URC does not have a cola product, the Company, similar to Pepsi Co., does have a diverse portfolio of snacks, including potato chips and cheese rings, and beverages, such as bottled water and other ready-to-drink (RTD) beverages. URC also competes with Mondelez in the confectionery business through its products of cookies and chocolates. 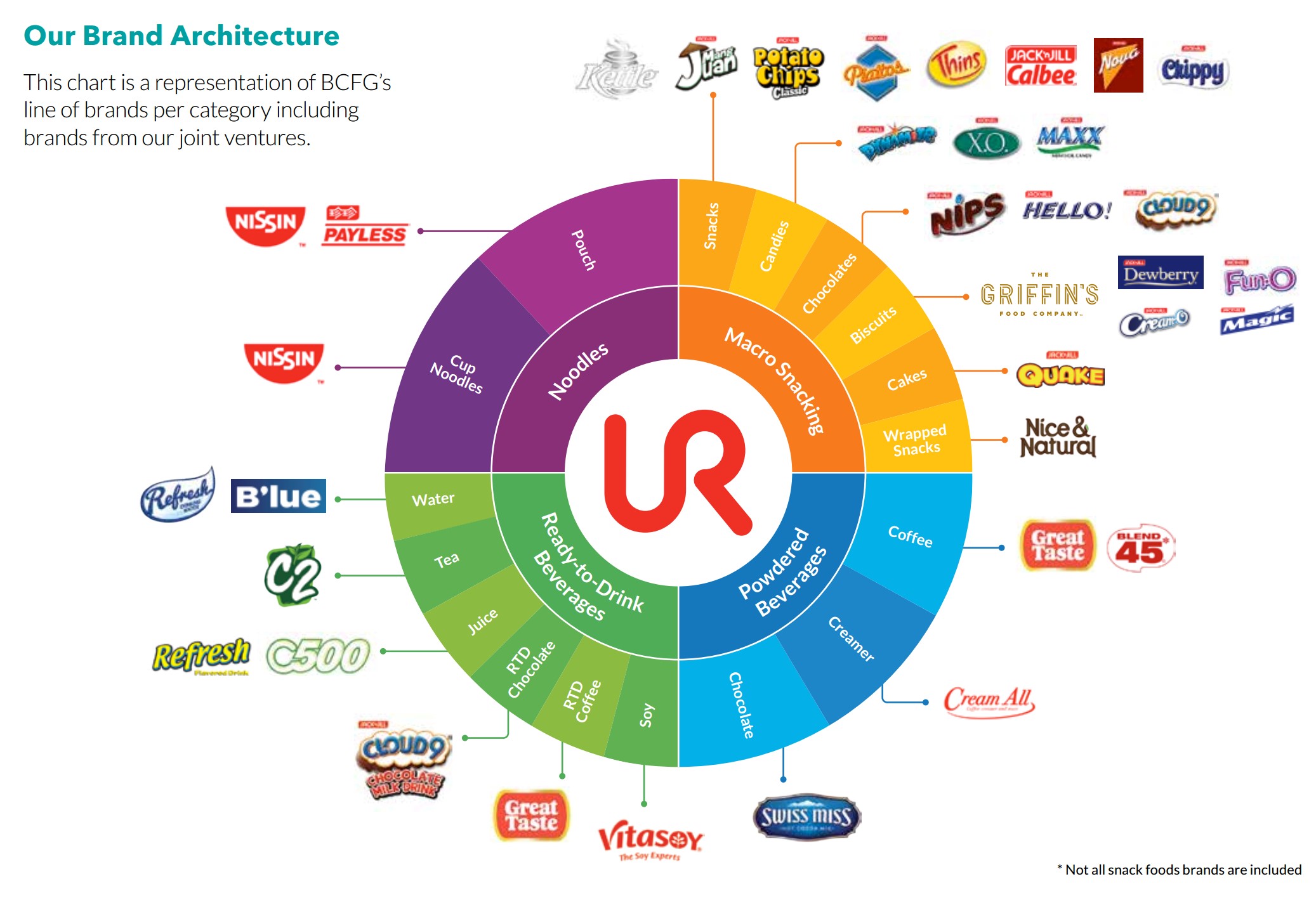 In addition to its home market, URC also has presence in 12 other countries in Southeast Asia and Oceania. Its major international markets include Vietnam, Thailand, Indonesia, Australia and New Zealand.

However, URC is more than just a branded food producer. In the Philippines, URC has two other segments, Argo-Industrial Group and Commodity Foods Group. The former is engaged in hog and poultry farming, while the latter involves flour and sugar milling. This part of the business is similar to Seaboard Corporation.

URC is thus divided into 4 segments: 1) Branded Consumer Food Philippines (CF Philippines), 2) Branded Consumer Food International (CF International), 3) Argo-Industrial Group (AIG), and 4) Commodity Foods Group (CFG). (3 and 4 are collectively known as the Non-Branded consumer food segment. We will refer it as the Non-Branded segment, even though there are still some branded offerings within this segment.)

CF Philippines is the most important segment for URC. It contributed 48% of revenue and 53% of EBIT in 2017. It is followed by CF International in terms of revenue contribution at 34%. Yet, the international segment actually has the lowest margins among all the segments. As such, only 19% of EBIT comes from this segment. In other words, while the Non-Branded segment only generated 18% of total revenue, it was responsible for 28% of EBIT.

In summary, in terms of operating profits, URC is roughly 3 quarters a branded consumer food company spanning in Southeast Asia and a quarter of a commodity foods producer in the Philippines.

Branded snacks and beverages, with brand heritage, tend to score very highly on the scale of durability. The keys to the business are brand recognition and shelf-space availability. The more well-known your brands are, the more willing retailers are to stock your products; and, the more available your products are, the more frequent customers will come across your products. There is thus a reinforcing element in the equation that favors incumbent players.

This is not to say that there is no threat from new entrants. A major concern to the durability of well-established players in this space is the ongoing change in customer behavior, such as the trend toward healthy foods, …