In May 2018, KLX Inc. (KLXI) announced an agreement to sell their Aerospace Solutions Group (ASG) to Boeing for $63/share in an all cash deal.

The deal was based on a successful spinoff of KLXI’s Energy Services Group (KLXE) because Boeing had no interest in buying this part of KLX’s business.

The management team led by founder, Chairman and CEO, Amin Khoury, initially tried to market the energy business for sale to trade and financial buyers. Bids were received from a mixture of competitors and PE houses in the range of $250-$400m but management felt very strongly that these valuations undervalued the potential of the business based on the rapidly improving market conditions, the higher market value of comparable companies and strong forecasted financial performance of the business.

Instead they decided to initiate a spin off which would allow them to run the energy business as a standalone, publicly traded entity.

Our investment opportunity lies in the spinoff of the energy business which will trade on the NYSE under ‘KLXE’.

The spinoff is expected to take place before the end of Q3 2018. Not long.

KLXI is a US listed company which used to be part of BE Aerospace (BEAV).

The energy business was founded through a quick succession of acquisitions in 2013-14 of seven regional oilfield services companies which each operated in the major shale basins in North America – the Southwest, Rocky Mountains and the Northeast. The execution and integration of the acquisitions was managed by Khoury and his executive team.

The business provides well completion, intervention and production services and equipment to major oil and gas E&P companies. Their customers include Conco Phillips, Chesapeake Energy and Great Western amongst others. These companies drill and create wells in the shale basins looking for oil and natural gas. When they have a pump issue, equipment gets stuck or loss, a valve becomes faulty or loose, or any other well-related issues they call in technicians or equipment and tools from a company like KLXE. Historically, some of these players would resolve these issues by having an in-house team but now a majority of them outsource the support services to companies like KLXE as the work is considered non-core to their daily activities.

One of the very attractive features of this type of business is that the services and products KLXE provides represents a small part of their customers’ overall well construction costs but without them there is a high cost of failure for the customer and so the products and services are considered ‘mission critical’. Add to this the fact that they serve their customers 24/7 365 days a year and you can begin to see how KLXE and companies like it are essential to the oil and gas ecosystem.

The business has a very good reputation with their customers which has resulted in strong growth of customer contracts from over 400 in 2016 to over 1,000 in 2018.

Competitors are mostly small regional players who don’t have the same scale or resources as KLXE and also some major multinational listed companies but these are not exclusively focused on US oilfield support services.

The period between 2015 and 2016 was a very difficult year for the oil and gas sector as oil prices collapsed down to below $40/barrel and this affected KLXE’s performance over the last few years resulting in losses. The business is now returning to profitability as the US onshore oil and gas sector is poised for a massive recovery. Throughout all of 2015 and 2016, the oilfield services industry experienced a deep retrenchment where both capacity and services across the industry were cut and the pricing of services became depressed. The industry began to see stable demand in late 2016 with oil prices rising back towards the $60/barrel mark.

Now there is a very strong positive outlook amongst the management team and its competitors for the US onshore oil and gas sector. This is represented by E&P companies increase their capital spend in North America by more than 30% in 2017. The comeback can also be seen by BP’s very recent $10.5bn acquisition of BHP Billiton’s entire portfolio of US shale oil assets (it’s biggest acquisition in almost 20 years). Other major oil and gas companies including KLXE’s customers are starting to ramp up their capital spending and operation expenditure so we would be picking up a business here at the right point in the cycle.

As mentioned the last few years have been difficult.

For the most recent financial year (31 Jan 18), the business had revenues of $320m, a net loss of $24m but generated a positive EBITDA of almost $27m which is a big improvement on the 2017 EBITDA of -$44m. More encouragingly, the achieved EBITDA in the first three months of FY2019 came in at $21m and management estimates the business will achieve a total EBITDA of $110m for the financial year ending 31 Jan 2019.

The spinoff will start Day 1 with a clean balance sheet.

Most notably, management have negotiated a $50m cash injection from the parent company (KLX Inc) and access to a revolving credit facility of up to $100m to ensure the business is well funded and ready for growth.

The aspect I like most about this spinoff is the alignment and incentivization of management. It says a lot that management are moving across to operate the energy business when it becomes standalone. Their plan is to grow the business via smart acquisitions and organically through innovating products via R&D and ensuring a high level of customer service.

But by far the biggest positive element is the fact that Khoury and his CFO will not be taking any salary compensation for the first 4 years and will instead receive 5% and 3% of the total equity of the company respectively which will vest over 4 years and is subject to continued employment.

I think the incentives of management are very important in this case. Keep in mind the following – Khoury is 79 years old, he has one son who runs his family office and has sold off most of his business empire (and made a lot of money in the process as a shareholder) with the KLX energy business being the only remaining piece. There is a good chance that he will do everything he can to grow the business over the next 12-36 months and sell it to trade or PE on the back of improved financial performance and in the process obtain a much higher valuation multiple than what came through the recent marketing effort.

This management team appear to have operational know-how which is key in an industry like this. For example, during the oil and gas sector downturn, Khoury and his team acquired $125m worth of equipment at a significant discount to replacement cost while actively maintaining their existing

equipment. They are not afraid to make tough decisions as evidenced by their decision to cut their workforce by 50% to reduce operating expenses in 2015.

Khoury and his team have a proven track record of adding value through acquisitions and disposals:

Sector Cyclicality – usually, I wouldn’t consider oil and gas companies because of the cyclical and seasonal nature of their businesses. However, a very interesting element of this spinoff is the agreement by the parent co (KLXI) to give KLXE a $50m cash injection. This is not a loan. It’s is basically a cash gift negotiated by management. It means that KLXE will begin life with $50m cash in the bank that can be used for operations and expansion. Management have also managed to agree a revolving credit facility of $100m of which they expect $50m to be immediately available for draw down on Day 1 post-spinoff. This facility will help provide for working capital and other operational requirements, however, management expect it to remain undrawn for at least the first 12 months. The cash gift, revolving credit facility and internally generate cash flow will give the business enough liquidity to fund growth for at least 12-36 months following the spinoff. This capital structure provides a good margin of safety in the investment and counter balances some of the risk arising from cyclicality.

Increased regulation or change in existing legislation could impact this sector. This is out of our control but I’m comforted knowing that the United States is committed to a long-term goal of energy independence. The demand for natural gas is expected only to grow especially as it is a cleaner burning fuel and the US has identified recoverable reserves of 2,355 trillion cubic feet of shale gas which all the major E&P companies are going to go after. It is also worth mentioning that US power stations are burning record volumes of natural gas at present and the US is now a net exporter of natural gas so the demand is there.

$110m EBITDA not being achieved – I don’t like to buy into businesses based on forecasted performance but with this opportunity I think there are 3 main points to support using managements estimated EBITDA of $110m:

The sale of KLX ASG does not go through. This is another risk out of our control but technically also not quite a risk. If the acquisition is terminated in accordance with the agreement, the KLXE spinoff may not take place. However, my understanding is that most potential hurdles have been cleared.

So how does one make money from this opportunity?

In short, KLXE is the unloved part of KLX Inc. There is likely to be some indiscriminate selling off which may reveal a very attractive buy-in price.

Historical investors seem to have looked at the energy business as tainting or masking the value of the aerospace business and this could drive further selling post-spinoff. I also think when KLXE is spun off it will be a small/mid cap stock and institutions who have owned KLXI will likely sell as the company will be too small. I think the market is currently undervaluing the energy business and once it becomes a standalone public company it will trade at multiples in line with its peers and provide a very nice return.

Here’s how I see the numbers working:

Boeing is buying the aerospace business for $63 per share which gives the remaining energy business an implied market value of $9.57 per share or a market capitalization of $492m ($9.57 x 51.4m shares).

If we assume that managements expectation of FY19 EBITDA of $110m is accepted, KLXE has an implied EV/EBITDA multiple of 4x ( $442m divided by $110m).

Now, have a look at its peer group: 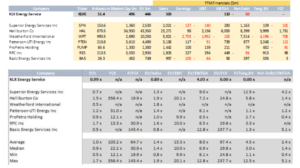 You can see that KLXE’s peer group is trading at a median EV/EBITDA multiple of 7x. Also worth noting is a company called Keane Inc recent acquired Rockpile Energy Services (a US oilfield services company) for approx. 6x EBITDA.

There is no obvious reason KLXE should not trade around the same multiple as it’s peer in due course, especially given a fresh start as a standalone business, industry tailwinds and a highly competent and motivated management team.

Below are some sensitivity tables which show the downside is pretty minimal and the upside could be fairly large which makes this a bet worth making.

I’m proposing taking a position in KLXE when the spinoff is complete and trading begins up to a maximum price of $10/share.

This is a chance to invest in a business that has a very well incentivized management team who know how to grow businesses and sell them for a lot of money. Although it is a cyclical business, the sector has a very positive outlook because of the expected rebound in US onshore oil and gas activity and the company will have a secured and clean balance sheet when it starts life as a standalone public company. I think all the factors are present for a mispricing e.g. the small size of the business and unloved business which should lead to indiscriminate selling by institutional investors and an asymmetrical investment opportunity for us.