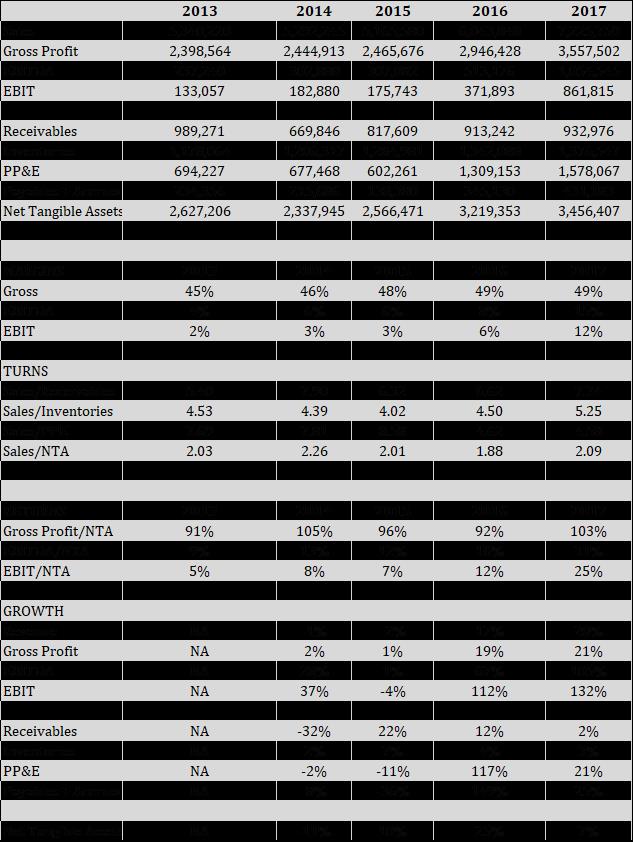 Let’s go ahead and get one thing out of the way. When I say nanocap and illiquid, I really mean it. Northfield has a market cap of 3.6 Million USD (234,237 shares x $15/share) and its 10/90 day volumes are 0 and 102 respectively. This is a tiny company and the largest daily volume (by far) of shares trading over the last year was 6,400 (around $95,000 USD). For some of you it probably doesn’t make sense to continue reading.

For some background, Northfield Precision was founded in 1952 by three men in Long Island, NY. The first products manufactured by the company were micro spin bearings, precision gear blanks, precision shafting, precision limit stops and miniature slip clutches for the electronic industry. The company went public in 1959. I was unable to determine what year the company stopped filing with the SEC, which probably means it was a very long time ago.

The company looks quite different now. None of the original founders are still at the company and they now manufacture air and diaphragm chucks. A chuck is just a specialized type of clamp. They’re typically used to hold or clamp a rotating workpiece that is being machined. Northfield supplies chucks to part manufacturers in a variety of sectors including automotive, aerospace, electrical/electronic, robotics, medical/optical, and machine tooling. It’s likely that their largest customers are in the aerospace and auto parts industries and in a nutshell, Northfield provides parts that are necessary to manufacture specific metal components for these industries (Examples include transfer case components, water pump components, crankshaft and driveshaft components). Depending on the complexity, one chuck is in the ballpark of between $2,000-6,000 which is typically less than 1% of the cost of the CNC (Computer Numerical Control) Mill or Lathe and typically a small percentage (thought not insignificant) of setting up a new process to produce an auto/aerospace component.

Because the company is dark and does not file with the SEC, I had to request the financials from the company directly and was provided with only the last 5 years. The company was unwilling to send financials further back than 2013. Based on 5 year numbers, durability can be difficult to determine from a quantitative perspective. Focusing on what we do know, we can say that the company certainty ticks the box from a longevity perspective since they’ve been around for 60 years. The company is certainly run conservatively, and like many small businesses (typically family owned), they carry no debt (besides some equipment leases) with a large amount of cash on hand.

Because the products the company sells are both competitively priced and such a small percentage of the total “new part” start-up cost for their customers, keeping the continuity of their customer relationships, timely delivery, and high product quality are what matter most for a company like this. Most customers are unlikely to switch from a supplier they’ve been using for a long period of time unless a serious quality issue arises or the supplier doesn’t possess the technical competency to meet new requirements/specs. I estimate that the company sells less than 1,500 chucks per year so it’s not a high-volume product where substantial amounts of money will be saved by switching to a slightly more affordable competitor.

What’s the durability of the industry? Milling has been around since the 19th century and CNC machining revolutionized the industry in the 1940’s. Along with electric and autonomous vehicles, cryptocurrencies, and AI, 3D printing has been in the news a lot lately. While 3D printing has its place, it will likely be a complement to machining (vs a replacement) for the foreseeable future. I’m not going to get into a lengthy discussion on why 3D printing isn’t going to circumvent the current methods but in short, 3D printing has its benefits and can be more cost effective than a CNC machined part for very complex geometries or prototyping/small volume runs. However, machining (and molding) will continue to have their place for a variety of applications (where tight tolerances are required or large volume production) for years and years to come. The chuck industry should also benefit from factories becoming more and more automated. Specialized chucks, in many instances, act as the “hands” of the robots to move parts through the production. To summarize, the industry seems highly durable. The only publicly traded competitor to Northfield I could find was a Japanese company called Kitagawa Iron Works Co. (Tokyo: 6317). Kitagawa sells machining accessory products and I couldn’t determine exact numbers, but it appears a large amount of their revenue is from chucks and different grips. Kitagawa’s market cap is about $216 Million USD, so it’s logical to assume there is plenty of room for continued runway for a tiny player like Northfield.

So now the question really comes down to determining if the company is durable. In terms of catastrophic risk, there is practically none. The company is extremely safe and protected by valuable assets (which I’ll cover in more detail later). The bigger question is whether their sales, margins, and returns are durable.

Let’s get the easy one out of the way- Sales. I honestly have no opinion on whether the sales are durable or not. In 2017, the company reached a record high for revenues. From 2013 to 2015 their sales stayed almost flat (down slightly) and then in 2016 and 2017 increased double digits. Industrial companies tend to have cyclical or lumpy sales results, so I wouldn’t be surprised if that’s the case with Northfield.  Northfield’s management believes there is growth potential. Each Annual Report comes with a short 3 paragraph commentary from the Chairman of the Board. The 2015 & 2016 commentaries mention:

“Northfield is committed in its efforts to develop new and creative products to meet the ever-increasing demands of our customers for innovative solutions to their work holding requirements. We have built a strong and vibrant company, one that will add new value for our customers through cutting-edge-technology and product development. All of our energies are focused on improving the performance of our company, thereby creating value for our stockholders.”

“We intend to continue our efforts to develop new products which we believe will increase our market share significantly.”

Margins and Returns– this is where things get interesting. Over the last 5 years, Northfield has had stable gross margins (~47%- which is more than double Kitagawa’s), but in terms of EBIT & EBITDA margins, it’s a tale of two cities. From 2013-2015, Northfield had an extremely difficult time turning their solid gross profit into operating profit. Their EBIT margins were razor thin at 2-3%, but then in 2016 and 2017, their margins doubled from 3% to 6% and again from 6% to 12%. The same pattern is reflected in their returns. The business posted unacceptable returns on Net Tangible Assets (NTA) from 2013-2015 that turned moderately acceptable in 2016 and definitively acceptable in 2017.

The company was unwilling to discuss any explanation of their results with me, however, there are two pieces of information from the Annual Reports that should be highlighted:

Is the new equipment a direct cause of the improved results or a just correlation? Or maybe a little of both? I don’t know but it is noteworthy and something to pay attention to.

As long as business continues as usual, shareholders can count on a steady, decently yielding dividend from the stock over the long term.

What’s the Value of the company at an EV of $3.6M (3.648M (Market Cap) – 0.702M (cash) + 0.657M (equipment leases))? Well let’s admit it, the last 2 years for Northfield Precision have been exceptional. We know they reached record high sales in 2017 and posted back-to-back sales growth of ~20%. Ironically, the stock price has barely budged in response to these record breaking results and the stock has jumped up and down in the range of $10-15 for 5 years now.  On top of the healthy revenue clip, operating margins have also drastically improved, creating a one-two punch that doubled earnings in repeat years.

So the real question- will the results last or will Northfield return to their former days of no growth and abysmal margins?

Let’s model out three scenarios to see how important it is to guess this properly:

The EBIT multiples I applied are arbitrary and based on historical multiples of poor/average/above average companies with a decent dividend yield. I tried to use conservative multiples that apply small discounts for lack of communication/disclosure and liquidity. They’re not perfect but they’re reasonable.

As you can see, if sales and margins contract, it makes a pretty big difference when valuing Northfield on an earnings basis. Stated another way, right now Northfield trades at a P/E of 6 but would trade at a P/E of 30 if they returned to their 2013-2015 performance.  One quick note is that Northfield will pay substantially less taxes next year due to the recent tax reforms. Before moving on, let’s take a look at one more valuation method.

I mentioned earlier that there was almost no catastrophic failure risk. The reason for this is because Northfield is really cheap on an asset basis. Their NCAV/share is $8 and about half is made up of cash and receivables. Furthermore, I referenced that they were founded by three guys in the 1950’s on Long Island right? Well, that’s one thing that’s never changed about the company. They’re still there. The company carries the Property and the Plant on the books for 720k. According to property tax records, the facility is 25,000 sq ft. and sits on 1 acre of land in Island Park, NY.

A quick google search reveals 2 comparable properties listed for sale. Both are on the same street and within a 5 minute walk.

So let’s say the property is worth $3M or something.

The valuable assets provide strong downside protection ($8 in NCAV) and strong liquidation protection (property value), but the biggest risk with Northfield is if they have extended future periods of no growth with inadequate returns on capital.

To Summarize: Northfield Precision is a company that makes products which assist in the manufacturing of auto/aerospace components. The company has high quality assets and is trading for 1.8 NCAV and less than their (cash + receivables + property – debt). The company has posted 20% sales growth in back-to-back years and on an earnings basis, the company trades at a P/E of 6 (adjusted to 4.3x when taking new tax rate into account) while paying out a dividend yield of 4%. However, if the company’s margins contract back to 2013-2016 levels, the shares may only be worth between $8-11 since it’s unlikely that the value of the property will ever be unlocked barring an acquisition or liquidation type event.

Based on limited info, NFPC shares are worth no less than $8 and no more than $30.

I don’t plan to buy any NFPC shares for the time being, but I’ll definitely be asking for their 2018 Annual Report.